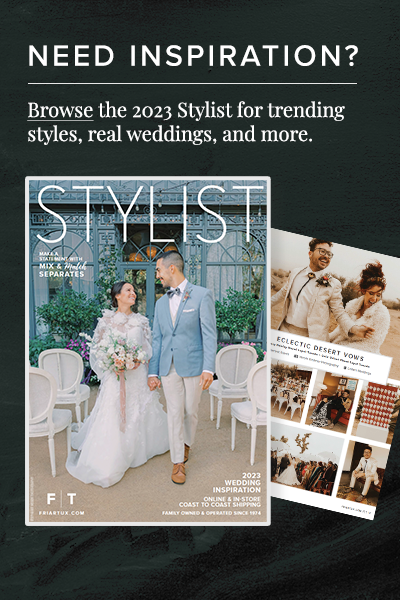 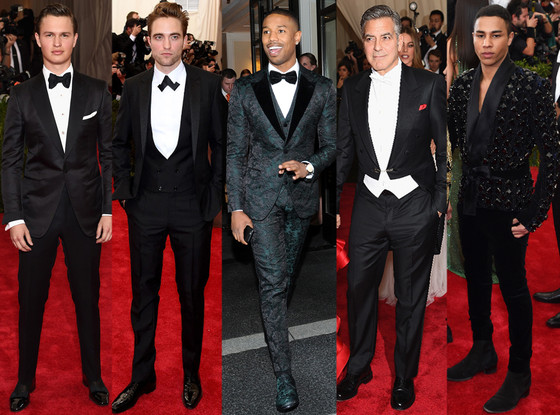 We love this time of year because we get to see what celebrities wear to fashions biggest event: The Met Gala. This charity event is held to benefit New York City's Metropolitan Museum of Art Costume Institute. Each year, the theme of the gala reflects The Costume Institute's exhibit that will be featured at the museum. This year's theme was focused on "China: Through the Looking Glass." The exhibit "explores the impact of Chinese aesthetics on Western fashion, and how China has fueled the fashionable imagination for centuries." We saw a lot of classic black and navy tuxedos. Celebrities also wore a lot of red because red symbolizes good luck and fortune in the Chinese culture. There were also patterns... and a gold dragon!

Because last year's theme was focused on designer Charles James, many celebrities wore black and white drawn from James' design style. If you missed last year's blog, you can view it now:2014 Met Gala Fashion.

Ansel, star of "Divergent" and "Fault in Our Stars," looks dapper in a sleek black tuxedo. He went with a peak lapel, which is the most formal lapel style out of the notch and shawl lapel styles. Get Ansel's Look: Black Carrera Tuxedo 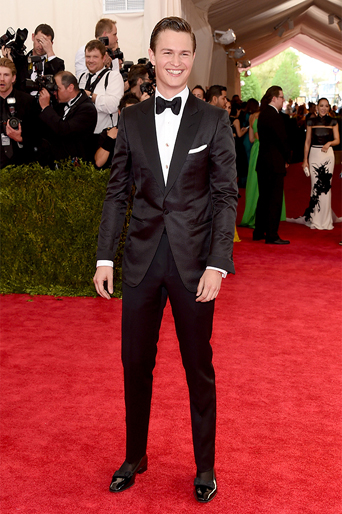 Neil Patrick Harris + David Burtka You can always expect Neil and husband David to "suit up" well. They are dressed up in white-tie attire with bow ties that are not overly matchy-matchy but also defines them as a couple. Their bow ties have a Chinese-inspired silk design. 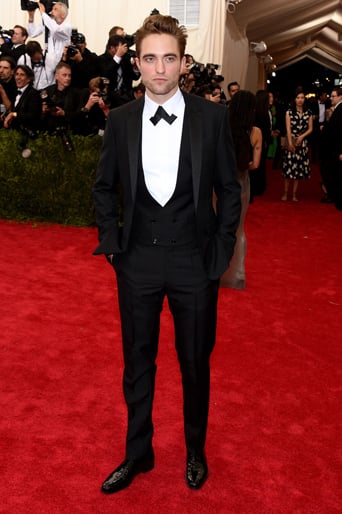 Common Accessories add a personalized touch to your outfit and Common is the perfect example. He used accessories to match the theme, it is subtle and elegant. He has jade cufflinks and a gold lapel pin of a swallow, also a symbol of good fortune to complete the look of his Prada tuxedo. Get Common's Look: Black Lorenzo Tuxedo 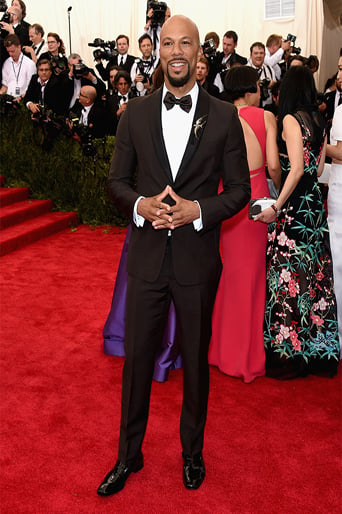 Blue Tuxedos   Andy Cohen Talk show host Andy walks the red carpet in navy. It is no secret that navy has been a popular red carpet style for 2015. The red poppy boutonniere adds a nice touch of the theme color to his navy tuxedo. Get Andy's Look: Slate Blue Allure Suit

Dwayne Wade + Gabrielle Union According to TMZ, "If Dwyane Wade looked like a million bucks at the Met Gala...it's because that's roughly how much his outfits were worth at his big night out...". His accessories don't come cheap but Dwayne stuck to the theme with a red sash and jewelry on his jacket. Actress Gabrielle looks just as lovely with a magenta Zac Posen gown. Get Dwayne's Look: Slate Blue Allure Suit 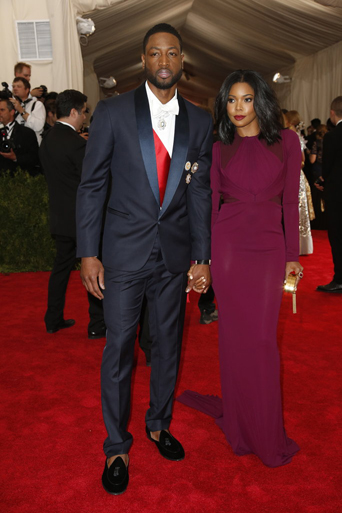 Mario Testino Another popular look is the mixing of coat and pant colors. Mario, a fashion photographer for fashion magazines such as Vanity Fair and Vogue, wore a navy tuxedo coat with black pants. If you want that traditional look with a twist, this style is the way to go. Get Mario's Look: Navy Lorenzo Coat + Black Pants 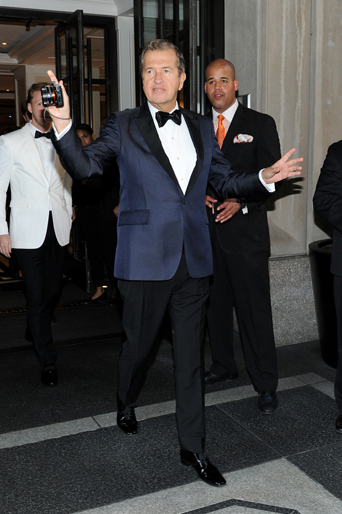 Zac Posen + Katie Holmes Fashion designer Zac Posen wore a double-breasted navy tuxedo with wide peak lapels. Katie looks just as stunning in her slightly deeper navy colored gown. We are loving the Chinese cloud designs at the bottom of her dress because it is not overdone. The dynamic duo rocked the navy look! Get Zac's Look: Navy Lorenzo Tuxedo 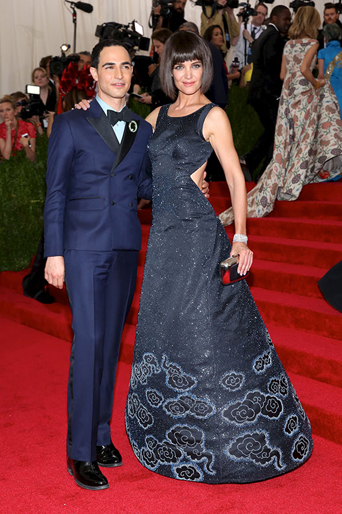 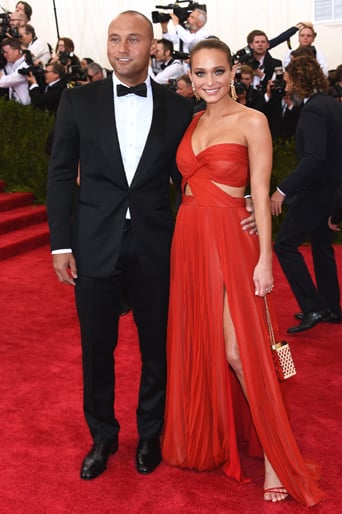 John Boyega John is looking good with his pop of color. This upcoming actor in the new Star Wars film, "Star Wars: The Force Awakens," wore a classic black velvet tuxedo with a simple burgundy bow tie. If you are in need of color options, we have 100's of color options to choose from! Get John's Look: Black Monterey Tuxedo 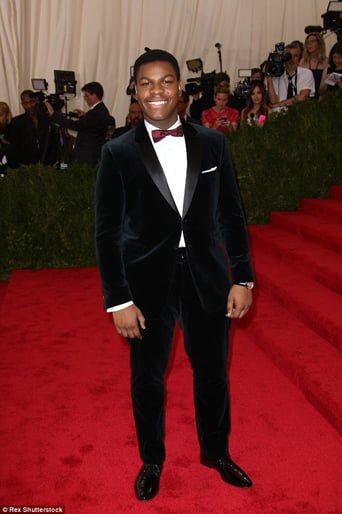 George Clooney + Amal Alamuddin These two sure stole the show in fashion. George is in the most formal dress code, white-tie attire. He is wearing a tailcoat with a wingtip collar and white bow tie. Oh, and we can't forget about his red pocket square! Amal is looking fashionable in a red John Galliano for Maison Margiela organza gown with an armored bodice. 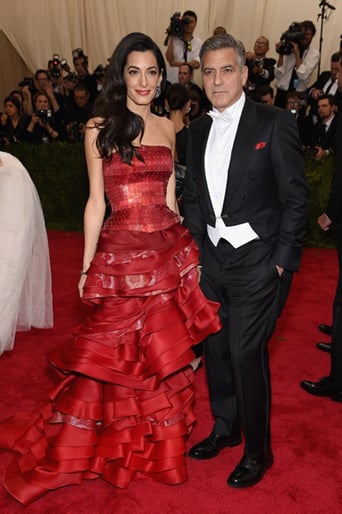 Miguel Dare to go bold in red? Miguel went all out for the Chinese theme by going in all red. Because the color red is so rich, the black shirt and pants adds a nice contrast to tone down the boldness of the color. Patterned Tuxedos   Justin Bieber Of course Justin would be the one wearing the coat with an embellished gold dragon. The dragon is also symbolic figure in the Chinese culture that stands for power and strength. It is modern and edgy, which fits his style well. Don't forget to throw in the sunglasses because of fashion--no, because he is Justin Beiber. 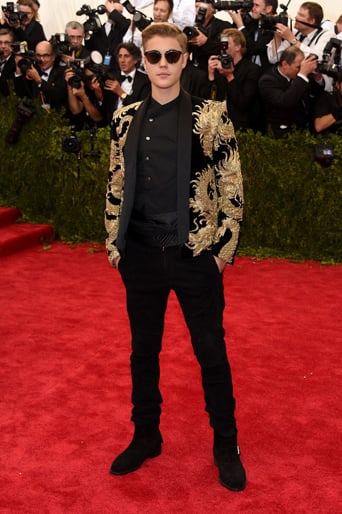 Michael B. Jordan This textured tuxedo could be a hit or miss but Michael wore it well. It is very well-tailored and a great example of how a slim fit tuxedo should fit. The Dolce & Gabbana ensemble is jade colored with a floral print. 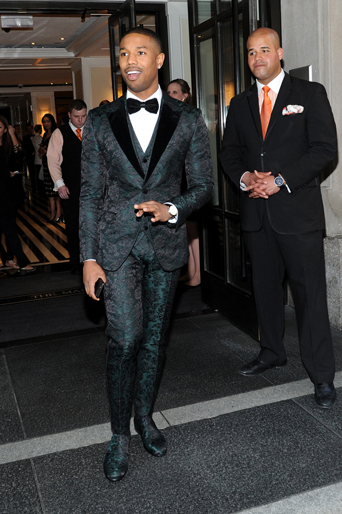 Adrien Brody Actor Adrien Brody wore a Dolce & Gabbanna coat with an embellished Chinese design with black pants. He managed to pull off this bold style, which is a perfect complement to his goofy personality. Visit us at any of our locations to make your own red carpet look with one of our stylists.

Want even more celebrity tux styles? Check out our blog posts about the 2015 Academy Awards Red Carpet and the 2015 Grammys Fashion.