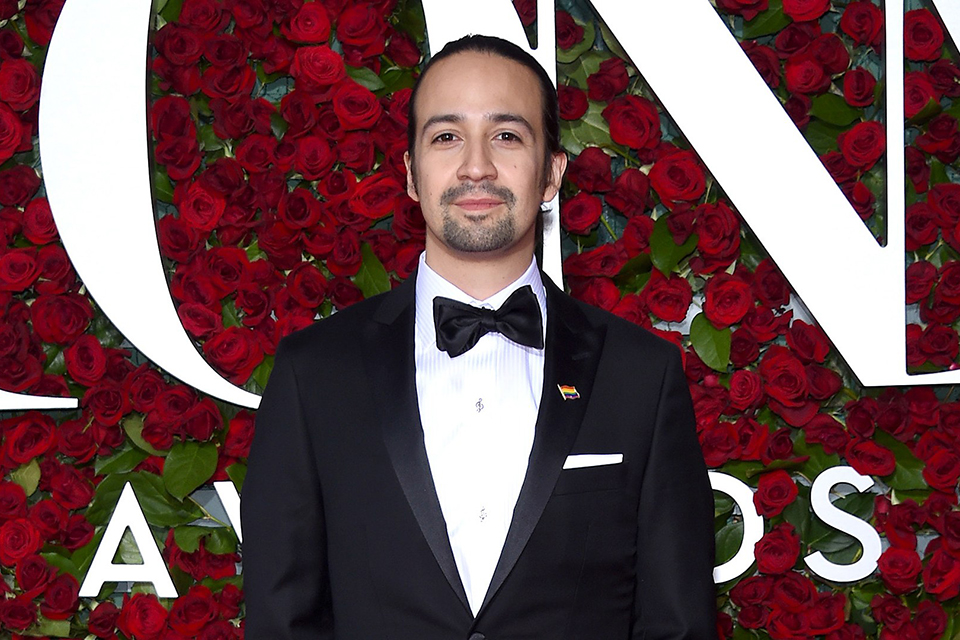 We've been watching the blue tuxedo wave roll in over the last few years and it's gotten to the point that blue/navy tuxedos are just as common as black tuxes. Men attending an award show with a date can appreciate the neutrality of navy- it looks great next to almost any gown color. For the 2016 Tony Awards, we saw lots of bow ties, lots of blue and James Cordon rocked lots of fun looks which won him our best dressed of the night! Visit one of our 31 locations where a personal stylist will help you find the perfect celebrity inspired suit! Blue/Navy Tuxedos Rent a Navy Tuxedo Buy a Navy Tuxedo Brandon Dixon received a Tony nomination for his role of Eubie Blake in Shuffle Along on broadway. He has also starred in The Color Purple, The Scottsboro Boys, The Lion King and for the past two years he has been working on producing new pieces in broadway. Brandon Dixon stole the show with his blue tuxedo and black bow tie look, complete with a patterned pocket square- a huge trend right now. Image from: zimbio.com Claire Danes and husband Hugh Dancy stunned the Tony Awards by being a match made in navy heaven. Claire Danes grabbed the public's attention when she appeared as Angela Chase in My So-Called Life in 1994. Following this role was an extremely successful film career and relationship when she married Hugh Dancy in 2009. Hugh Dancy was born in England and started his career with several television roles and theater appearances. He has since become well known for his roles as the Earl of Essex in the mini-series Elizabeth I and Will Graham on the show Hannibal. Claire Danes rocked the red carpet in a midnight blue satin gown alongside Hugh Dancy who wore a matching navy tuxedo with black lapels and a long black skinny tie. 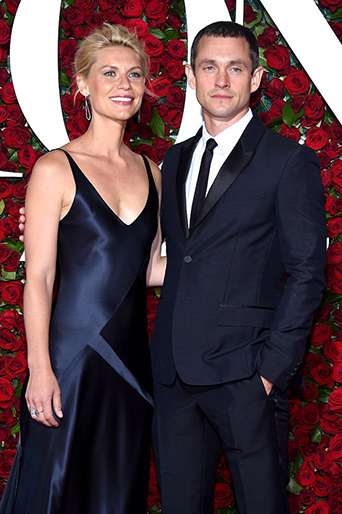 Image from: parade.com Blair Underwood has had quite the successful theater career, as well as producing and directing short films and music videos. He also made his film debut at the age of 21 and has continued to act in numerous roles since then. Blair Underwood wore a blue tuxedo with a white dress shirt and black bow tie and black shoes, every detail is on point. Image from: E! Online Laura Benanti is a four time Tony Award-nominated stage actress who started her broadway career at the age of 18. Laura also went on to star in several television shows including her most recent role in the series Nashville. Laura is joined by her husband Patrick Brown, who wore a navy tuxedo with black lapels and a long black skinny tie.  We're loving his loafers sans socks which adds a more casual and cool vibe to his black tie style. 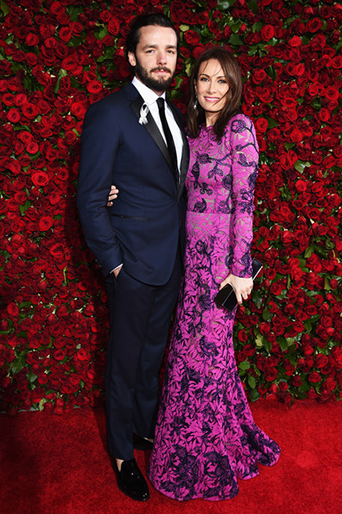 Image from: zimbio.com Andrew Rannells is an actor most known for his recent role in The Intern which came out in 2015, Bachelorette in 2012 and Street Sharks in 1994. He has also made television debuts in many shows throughout his career. Andrew Rannells arrived at the Tony Awards wearing a J.Crew blue tuxedo with a black bow tie and something we rarely see-- navy patent leather tuxedo shoes-- we are still deciding how we feel about these... 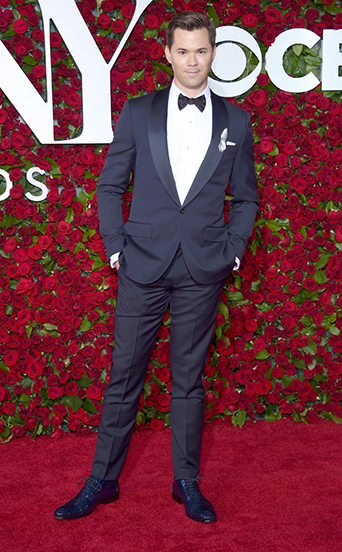 Image from: E! Online Aaron Tveit is an American actor and singer. His career originated on broadway with the roles of Gabe in Next to Normal and Frank Abagnale Jr. in the stage version of Catch Me If You Can. He is most known for his role in Les Miserables back in 2012 and recently starred in Grease Live as Danny Zuko. Aaron Tveit is wearing super dark navy/midnight tuxedo with a navy bow tie and black shoes. The tailoring on his tux is pretty perfect.

Image from: E! Online Josh Groban is an incredibly talented singer, songwriter, actor and producer. Although he is known for his incredible singing voice, he has appeared in several television shows and films throughout his career. Josh Groban wore a blue tuxedo with black lapels and a long black skinny tie for the 2016 Tony Awards. His look gives you the comparison between a navy tuxedo with a bow tie or a navy tuxedo with a long tie (we like the bow tie!).  He and many other celebrities showed their support for the victims of the Orlando shooting by wearing a silver ribbon. Image from: E! Online Black Tuxedos Rent a Black Tuxedo Buy a Black Tuxedo Common, who was first known as a rapper, transitioned into acting with his first television appearance in 2003. His most recent role was in The Wiz Live! a live production of the 1975 broadway musical The Wiz, which put a modern spin on the classic Wizard of Oz. Common looked sharp on the red carpet in a classic black tuxedo with a black bow tie.  We're into his refined shirt collar and smaller bow tie, it's a more tailored look. 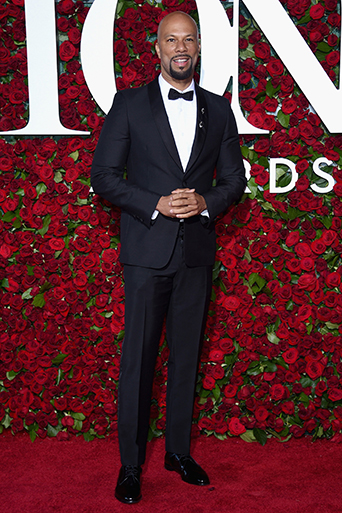 Image from: GQ Daniel Dae Kim jump started his career on stage where he performed in classics such as "Romeo and Juliet", Anton Chekhov's "Ivanov" and Henrik Ibsen's "A Doll's House." Daniel went on to star in several film and television appearances, with his most recent film being The Adjusment Bureau with Matt Damon. Daniel Dae Kim is also well known for his long role in the television series Hawaii Five-O. Daniel also played it safe with a classic black tuxedo and black bow tie with just a sliver of white pocket square for this years Tony Awards. Image from: E! Online White Tuxedo Rent a White Tuxedo Buy a White Tuxedo Stephen Karam is a playwright who started his career as a teenager. Although he has occasionally acted, Stephen is most known for his brilliant writing skills and productions. Stephen Karam mixed up the classic tuxedo look by wearing a white tuxedo jacket with black pants and topped it off with a black bow tie.  The black details on his white tuxedo coat make the look more fashion forward and fun. 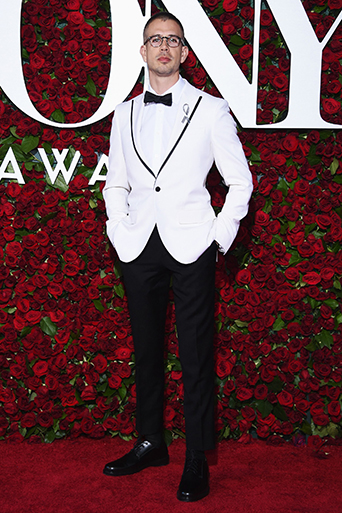 Image from: GQ Burgundy Tuxedo Rent a Burgundy Tuxedo Buy a Burgundy Tuxedo James Cordon is a London born actor, writer and producer. James started his acting career in small television roles and had his broadway debut in Alan Bennett's play The History Boys. James became the host of The Late, Late Show in 2015 where he is most known for his comedic genious and segments such as carpool karoke. James Cordon brought his A game to the red carpet by wearing a very trendy Burberry burgundy tuxedo with a black bow tie, alongside his wife Julia who wore a beautiful floral print dress with flecks of complimentary burgundy shades. Book an appointment to choose your wedding look with one of our stylists at your local Friar Tux Shop.